2021 has been marked by several novelties for Euronovia and its team. Here is a brief overview of the most important events!

For Euronovia, 2021 is above all the launch of the new European framework programmes, in particular Horizon Europe. The new European programme for research and innovation has an increased budget, with 95.5 billion euros allocated to it.

While similar to its predecessor, Horizon Europe contains some new features. These include a greater emphasis on interdisciplinarity, gender, and the social sciences and humanities, as well as a new requirement for publishing the scientific data produced by European Commission-funded projects in Open Access.

New instruments are also being introduced in the programme, such as the European Innovation Council’s (EIC) WomenTech EU, which supports deep tech start-ups ran by women.

The new programming period has also been marked by the launch of other framework programmes such as Erasmus +, which will celebrate its 35th anniversary this year, and LIFE, the EU’s funding programme for environment and climate action, whose budget has increased by 60% compared to the previous period.

Great success for our clients

Euronovia supported many winning projects in the framework of Horizon 2020 and Erasmus+, for instance, EURiDOC and ClearDOC. Great successes have also been achieved by the startups, such as Flint Media and Urgences Chrono.

We have also been selected for calls for framework contracts by the Institut Mines-Télécom, INRAE, and Sorbonne University in order to support the grant application of European projects.

In 2021, three new projects in which Euronovia is involved have been launched with important events:

Among our ongoing projects, the SFERA-III project has also launched its 4th transnational access campaign. Open until 31 January 2022, the call offers researchers free access to 43 facilities in 14 leading research infrastructures in the field of concentrated solar thermal energy.

Finally, after nearly 5 years of collaborative research in concentrated solar power development with 10 partners from 7 countries, the Next-CSP project ended in July 2021. Watch the end of the project video here!

The team has been strengthened with four new collaborators during this new year:

We also have the pleasure to announce the opening of an office in Toulouse.

2021 was also a year in which Euronovia developed its training offer.

Some trainings also focused on sub-programmes such as:

Do you wish to strengthen your skills in European or national project grant applications and management? Fill in our online form or contact us for a tailor-made training offer. 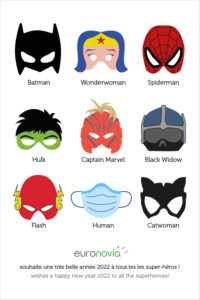